Geopathic means disease of the earth/environment.
Geopathic stress is imposed on the body by exposure to radiation from either manmade or natural sources. Manmade sources include emissions from power lines, transmission masts, microwave ovens, computers, mobile/cordless phones plus more. Natural sources of geopathic stress come from a disruption in the natural energy flow, e.g. if a house is built directly over underground water streams or over the earth’s magnetic lines, the altered energy vibration from these sources can then be damaging to our health. Ultimately the overall result of geopathic stress is a lowering of our immune system and subsequently ill health.

Do you suffer from any of the following…….

Geopathic stress could be the cause!

Dr. Micheal Poynder, pioneer of geopathic and personal stress studies, stated
“Geopathic stress may manifest in physical symptoms such as reduced vitality, chronic sleep disturbances, high states of anxiety, aggression or hyperactivity. These symptoms can be difficult to diagnose or treat using conventional methods. It is now more accepted by the medical community that sleeping over underground water flows, particularly when it contains iron, is a major cause of ME, and that sleeping over disrupted magnetic lines is a major cause of MS. In both conditions the human immune system is gradually depleted; the result being cancer.” 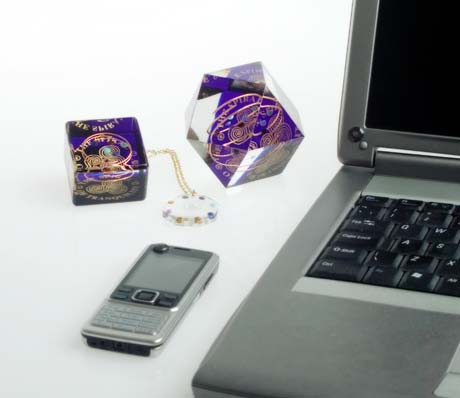 Fortunately, balancing devices have been created to counteract geopathic stress.
After over 20 years of research, Clive Beadon, DFC, Wing Commander of the British RAF (and renowned Dowser) identified that the use of 8 particular gemstones coupled with positive and negative copper coils, enables chaotic energy patterns to be effectively realigned and restored into perfect balance. The resulting energy balancing device is known as The Spiral of Tranquility™ “Spiral”.

‘The “Spiral” has been realigning geopathic energy in homes, workplaces, farm buildings and stables worldwide for over twelve years.

A “Pendant” version, worn around the neck to protect the wearer, has a similar capability and has also been very successful in combating electromagnetic stress from electronic devices such as computers, office equipment, microwave ovens, TV’s and mobile/cordless phones.
The “Pendant” has also been found to be very effective against
JETLAG, see www.jetlagcure.net

1. Underground water-flows beneath a property or structure.
When a structure is built above an underground water-flow, the natural reaction of the water energy is restricted, and disruptive vibrations are set up in the building. Thus, over a period of time, the body’s resistance can be affected, leading to stress and subsequent illness.

2. Fragmented Earth energy lines.
When a home or structure is built over natural earth magnetic energy lines (ley lines) it causes them to be split up into component rays which are damaging to our health.

3. Harmful emissions from modern electrical & electronic appliances.
This includes televisions, computers, microwave ovens, fluorescent lighting, and not least mobile phones. There is mounting evidence that radiation from everyday electrical appliances depletes the healthy quality of our blood, causing the breakdown of the immune system – which creates stress and in turn may lead to illness and disease.
Well known electrical fields existing under pylons and high voltage cables are acknowledged by the USA and some EU countries as being directly related to cancer and heart disease. Balanced Earth Energy lines crossing these strong fields acquire some of the grid’s characteristics, carrying subsequent disruption many miles further afield.
Other sources of geopathic stress are radon gas and mobile phone transmission masts & dishes.
Considerable research by doctors and scientists has been published concerning the hidden dangers of mobile phones, even on standby mode. When in use, up to 80% of the microwaves from these sophisticated mobile phone transmitters enter the head and brain.

Disruptions from any or all of these sources, encountered by human beings or animals anywhere in the home, workplace, farm, etc., give rise to discomfort that affects general health and well-being.
When a building lies in the path of these energies, the occupants can feel restless and under unexplainable constant pressure.

Where unbalanced magnetic lines occur in concentration, they may give rise to discomfort and disquiet, impinging on an individual’s subconscious mind. We humans, and animals alike, feel this through our subconscious and become subject to stress symptoms. When a para-magnetic line meets an obstruction such as a house, large stone, monument or perhaps a well, it fractures into component rays. (For further info on para-magnetic lines see “The Lost Magic of Christianity page 186 by Dr. Michael Poynder, ISBN 0-9536631-0-8). It is these subsequent shattered unseen component rays which cause many distressing unrecognised or undiagnosed health problems. Such symptoms are only temporarily treated by orthodox medicine.

Similarly, when a structure is built above an underground water-flow, the natural reaction of the water energy is restricted, and consequently disruptive vibrations are set up within the building. Instead of activating at a benign 8Hz, the natural “beat” of the earth, which parallels natural brain wave patterns, surrounding energy is split into different vibrations, which can be picked up by a dowser as separate colour frequency lines. If we sleep over or above any of these lines, troubled sleep may result, affecting the body’s resistance over a period of time leading to stress and subsequent illness.
See page 38 of “The Lost Magic of Christianity” by Dr. Michael Poynder, ISBN 0-9536631-0-8, for an explanation of the Chakra System and how different colour frequency centres correspond to various parts of the body. For example, an indigo/violet line may cause headaches or migraines; a green line, heart problems; a red line, anxiety and/or anger, etc.

Explanation of “Dowser”
A person who uses their intuition, with the aid of tools or otherwise, to detect unseen energies from sources such as underground water, natural earth magnetic energy lines (ley lines), minerals, toxins or any combination of same causing fragmented energy vibrations capable of causing damage to human health.

Postage is now FREE for all orders!